Teaching a chatbot to Read and Comprehend has been elusive until recently. While DeepMind seems to have figured how to search documents to find answers, Microsoft Research has a chatbot that can answer questions in a number of languages.

Teaching a chatbot to read, process and comprehend natural language documents and images is a coveted goal in modern AI. We see growing interest in machine reading comprehension (MRC) due to potential industrial applications as well as technological advances, especially in deep learning and the availability of various MRC datasets that can benchmark different MRC systems. Despite the progress, many fundamental questions remain unanswered: Is question answer (QA) the proper task to test whether a machine can read? What is the right QA dataset to evaluate the reading capability of a machine? For speech recognition, the switchboard dataset was a research goal for 20 years – why is there such a proliferation of datasets for machine reading? How important is model interpretability and how can it be measured? This session will bring together experts at the intersection of deep learning and natural language processing to explore these topics.

How to Make a Text Summarizer – Intro to Deep Learning #10

Google released SyntaxNet, an open-source neural network framework implemented in TensorFlow that provides a foundation for Natural Language Understanding (NLU) systems. The release includes all the code needed to train new SyntaxNet models on your own data, as well as Parsey McParseface, an English parser that we have trained for you and that you can use to analyze English text.

Parsey McParseface is built on powerful machine learning algorithms that learn to analyze the linguistic structure of language, and that can explain the functional role of each word in a given sentence. Because Parsey McParseface is the most accurate such model in the world, we hope that it will be useful to developers and researchers interested in automatic extraction of information, translation, and other core applications of NLU.

Get the code from Siraj’s AI Reader video at https://github.com/llSourcell/AI_Reader

Get started with DialogFlow 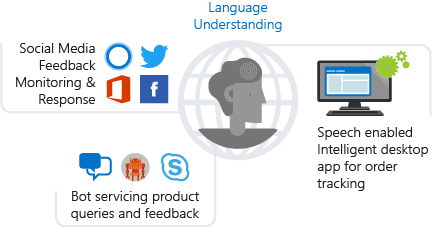 Your client application (such as a chatbot) sends user text of what a person wants in their own words to LUIS in an HTTP request. LUIS applies your learned model to the natural language to make sense of the user input and returns a JSON format response. Your client application uses the JSON response to fulfill the user’s requests.

What is a LUIS app?

A model begins with a list of general user intentions, called intents, such as “Book Flight” or “Contact Help Desk.” You provide user’s example phrases, called utterances for the intents. Then mark significant words or phrases in the utterance, called entities.

Prebuilt domain models include all these pieces for you and are a great way to start using LUIS quickly.

Once your model is built and published, your client application sends utterances to the LUIS endpoint API and receives the prediction results as JSON responses.

Teaching Machines to Read and Comprehend

In the October 2015 paper, Teaching Machines to Read and Comprehend, the authors from Google DeepMind and the University of Oxford proposed a supervised learning method using deep neural networks that learn to read real documents and answer complex questions with minimal prior knowledge of language structure.

Abstract
Teaching machines to read natural language documents remains an elusive challenge. Machine reading systems can be tested on their ability to answer questions posed on the contents of documents that they have seen, but until now large-scale training and test datasets have been missing for this type of evaluation. In this work, we define a new methodology that resolves this bottleneck and provides large scale supervised reading comprehension data. This allows us to develop a class of attention based deep neural networks that learn to read real documents and answer complex questions with minimal prior knowledge of language structure.

Cloze style questions are fill in the blank questions. Words may be deleted from the text in question either mechanically (every nth word) or selectively, depending on exactly what aspect it is intended to test for. The methodology is the subject of an extensive academic literature; nonetheless, teachers commonly devise ad hoc tests.

Example
A language teacher may give the following passage to students:

Implementation of Teaching Machines to Read and Comprehend code on GitHub:

The three models implemented in this repository are:

We trained the three models during 2 to 4 days on a Titan Black GPU.

We would like to thank the developers of Theano, Blocks and Fuel at MILA for their excellent work.

We thank Simon Lacoste-Julien from SIERRA team at INRIA, for providing us access to two Titan Black GPUs.

Try the Teaching an AI yourself on Google Colab:

The move from hand-designed features to learned features in machine learning has been wildly successful. In spite of this, optimization algorithms are still designed by hand. In this paper we show how the design of an optimization algorithm can be cast as a learning problem, allowing the algorithm to learn to exploit structure in the problems of interest in an automatic way. Our learned algorithms, implemented by LSTMs, outperform generic, hand-designed competitors on the tasks for which they are trained, and also generalize well to new tasks with similar structure. We demonstrate this on a number of tasks, including simple convex problems, training neural networks, and styling images with neural art.

New problems can be implemented very easily. You can see in train.py that the meta_minimize method from the MetaOptimizer class is given a function that returns the TensorFlow operation that generates the loss function we want to minimize (see problems.py for an example).

It’s important that all operations with Python side effects (e.g. queue creation) must be done outside of the function passed to meta_minimize. The cifar10 function in problems.py is a good example of a loss function that uses TensorFlow queues.

Disclaimer: This is not an official Google product.